I woke up Friday wishing something I never thought I would:  I needed it to be at least 100F in Austin.   You see, later in the afternoon I would be utilizing the scorching Texas sun and my frustratingly hot black car to bake 2 dozen chocolate chip cookies the greenest way I know – on my car dashboard.

According to my research, the slice-and-bake cookie is the best, as drop cookies do not cook very evenly.  Rather than buying Pillsbury, I made my own dough, then rolled it into a log and refrigerated it overnight.

In a small bowl, whisk together flour, baking powder, baking soda and salt.  In a large bowl, cream together butter and sugars. Beat in egg, followed by flour mixture and chocolate chips.  Place dough on a large sheet of wax paper and roll into a log approximately 11-inches long by 2.5-inches wide. Freeze for 2-3 hours, or overnight. 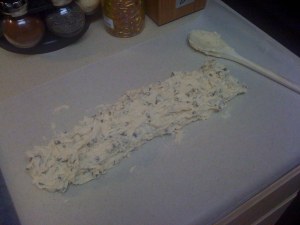 Lucky for me, the next day Austin got up to about 97 around 2pm.  I sliced out my cookies (they ended up a little oblong), put them on wax paper, then placed them on the dashboard with oven mits keeping them  lifted (not sure what hot metal would do to my dashboard – better safe than sorry).

One hour later, they had started to get a little soft around the edges: 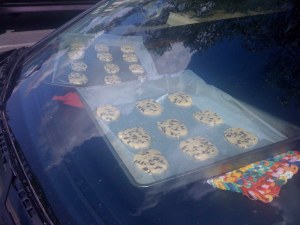 3.5 hours later, they were done! They were a little crispy around the edges and soft in the center.  They slid a little on the wax paper, which my research told me was a good sign.  They won’t brown, as the sugar doesn’t caramelize during this particular baking process. 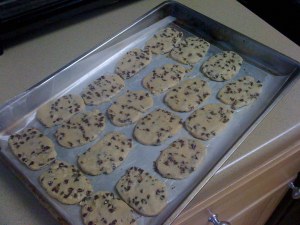 And they were delicious!  We were having friends over for dinner later that night, so I ended up making ice cream sandwiches for a quick and summery dessert.

Austin, Texas
View all posts by REL →
This entry was posted in In the Kitchen. Bookmark the permalink.